The morning of July 28, 2013, Justin and I drove to Peek a Baby in Modesto. The drive was full of nervous anticipation as we speculated what the gender of Baby Griffin would be. Would Baby Griffin be Daddy’s baseball player or Mommy’s pageant princess? We arrived early and quickly completed all the paperwork. Once completed, we were promptly taken back for our ultrasound. The technician quickly identified the gender of Baby Griffin and didn’t keep us waiting. She pointed to three, small, white lines on the screen and stated, “It’s a girl.” With tears in my eyes, I turned to Justin. He was crying too. It was such an incredible moment. Baby Griffin was a girl. The first words out of my mouth, “I got my girl!” I was in shock. The whole appointment was so quick. It wasn’t until we left the place, I became overwhelmed with emotion and started crying. Not only had the Lord blessed us with a baby, he had granted my wish of a baby Girl. The little girl I had pictured in my dream, was true.

As we drove home, I stared at the photos. I couldn’t believe I had gotten my girl. Just knowing the gender, made this journey all that more real.  We could finally envision Baby Griffin in our arms.

Before I formed thee in the belly I knew thee…

With minimal explanation of the photos we received doubt started to creep in. Despite our initial belief Baby Griffin was going to be a girl, we let others convince us that we would be expecting a boy. We spent the next hours looking and comparing our sonogram photos to those we found online. It seemed too good to be true. The next morning, I made the decision to get a second opinion. I drove to Modesto a second time in two days for confirmation of Baby Griffin’s gender. It doesn’t hurt to have a second opinion from a second place, right? Womb’s Window (previously known as Womb with a View) was a very friendly experience. Within moments of meeting the technician I felt at ease. As I prepared myself for the possibility that the original gender peek was incorrect, I began to get nervous. It wasn’t long before the technician pointed to the screen and stated, “It’s a girl. She’s all girl.” It was such a relief. The technician and I laughed as I shared with her my previous doubts. She answered all my questions, and detailed each minute of the sonogram. I cried watching my daughter on the screen as she played with her feet, and waved. It was as if she knew I was watching her. It was the greatest fifteen minutes. She’s a star in the making and true gift that I am forever grateful for. The best part was not only did the technician provide confirmation that Baby Griffin was indeed a girl, she provided me with a DVD of the ultrasound. I spent the remainder of the evening watching my daughter’s DVD over and over till I fell asleep. My daughter- words can’t express the amount of love I already have for her. I never knew one could love someone who they had yet to meet. It’s exciting, scary, and nerve wrecking all at once. I am sooo in love with her.

Today’s the day we find out if Baby Griffin is a boy or girl. We are soo excited! I haven’t been able to sleep just imagining different nursery themes for either gender. Butterflies, anticipation and excitement made for a sleepless night. Justin is just as excited if not more. Well…Prince or Princess… 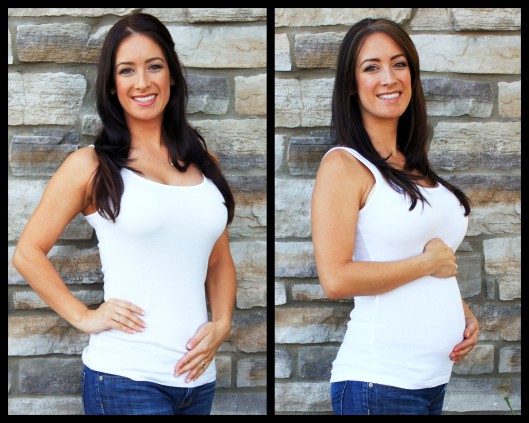 Feeling:The first trimester was great. I consider myself lucky not having any morning sickness. I have found that when people hear you’re pregnant they want to know if you’re feeling sick, or puking but I’m not sure many people who haven’t been pregnant truly understand the serious fatigue pregnant women feel, especially in their first trimester
Symptoms: Extreme fatigue, breast tenderness, and an increased appetite.
Food Cravings: Fruit and fresh water. To say I crave tons of fruit would be an understatement. These days I can finish an entire watermelon in one day, in addition to several other fruits. Thankfully it’s the perfect time of the year for such cravings.
Food Aversions: None
Clothes: At the beginning my clothes still fit and the only change to be noticed was in my shirts/ bras. Now, although family and friends tell me I haven’t gained much, I can’t fit in my normal clothing sizes. It’s a new experience to have to be selective in what I wear.
Weight Gain: Yes, I am fortunate enough to have a small frame, but I don’t take advantage of that and put my work into the gym and am conscious of what I eat. But for once it’s nice not to worry about my weight. I have given it thought and plan on documenting my weight gain by doctor’s appointment only. I feel gaining weight while pregnant is a beautiful thing and should not be considered bad… nor should a woman be made to feel self-conscious about gaining weight during her pregnancy. But for curious minds, I will share that I have not gain any weight so far. Despite having no weight gain I have noticed my weight shift towards my rounding belly and anxiously await the anticipated weight gain of at least 12 lbs. during the second trimester.
Sleep: Initially, I experienced no changes to the way I slept and still slept on my stomach. The major change to my sleep was the constant waking up every 1-2 hours to go pee. Needless to say, I am glad that part has passed for now.
Best Moments: The obvious best moment was confirming I was pregnant and seeing Baby Griffin in the sonogram and hearing the heartbeat. What an emotional moment. It’s been such a wonderful experience sharing our exciting news with family and friends.
Memorable Moments: Finding out my favorite actress Jennifer Love Hewitt is also expecting her first child.
Random: I really thought I would miss my daily cup or two of coffee. Surprisingly, that has been easy to give up. The one caffeine drink I do miss… my preworkout supplement. Oh, and did anyone else forget how to do their hair and makeup while they were pregnant? Lol, I sure have.
Looking Forward to: Finding out the sex of Baby Griffin… Can’t wait, only a few more weeks!!! Any guesses???